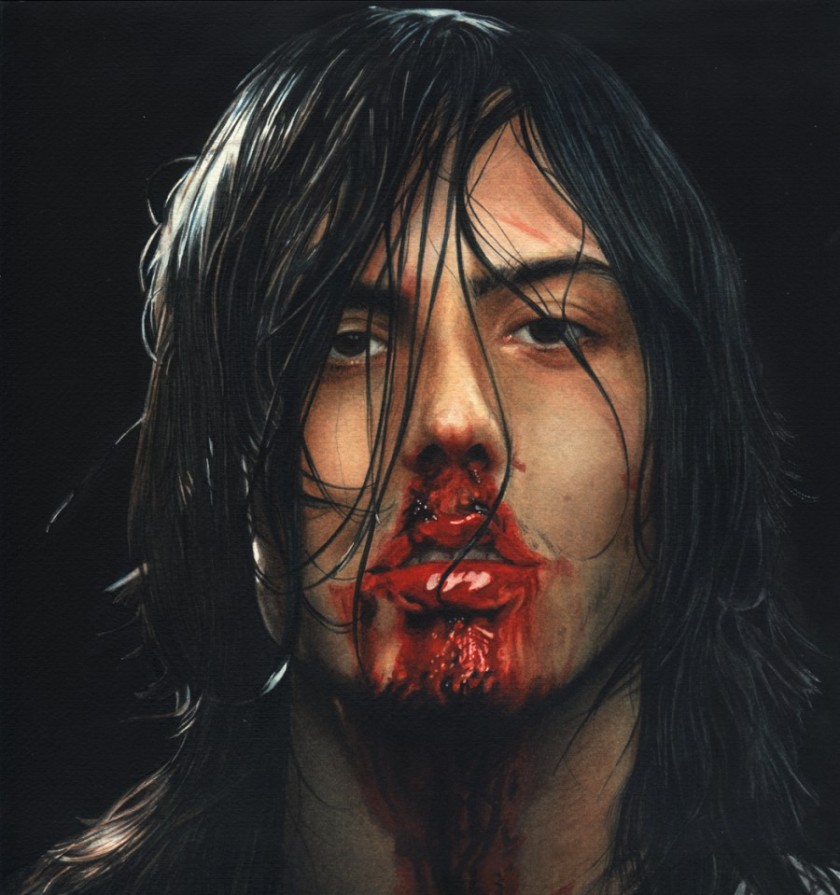 Most know him, however, as a self-proclaimed “professional partier.” As far as job criteria go for that title, Andrew said there’s actually not a whole lot involved. If anything, it requires the barest of the minimum.

“The first criteria would be [to] be alive. But if you’re a zombie, you’re allowed as well,” the musician told The Link over the phone from Los Angeles. “Beyond that, there’s not much. I can’t define it. It’s the choice to think about the things that you don’t wanna think about, and enjoying it. That is partying. It’s having fun while you’re alive.”

Over 12 years since the release of his debut album I Get Wet, which boasted hard-rocking tracks like “Party Hard” and “She is Beautiful,” the white T-shirt and jean-clad master partier is still throwing crowds into a blood-stained frenzy with his live shows, including an upcoming date in Montreal this Wednesday at thrashing venue Foufounes Electriques. The show will be a long-awaited return to the city he calls one of his favourite places in the world to play in.

“I’d like to get some smoked meat, if possible,” he confided. “I’d like to get a bagel—very, very good bagel places in Montreal—and I’d like to go to St. Hubert […] It’s one of those places [that] pops to the front of my mind whenever I think about Montreal.”

Despite not coming here as often as he’d like—his last two appearances here were in Laval for POPMontreal in 2011 and at the Vans Warped Tour the year prior—he’s had a handful of memories of both Montreal and Foufs specifically. When

Montreal was one of the last cities Andrew played in on a previous tour, one of his band members partied perhaps a bit too hard after the gig.

“One of my best friends, our guitar player, he passed out in such an intense way that he missed his flight and he missed every other flight and he had to end up riding on the bus all the way back from Montreal to Orlando,” he said.

“We were smacking his face as hard as you can trying to wake him up. […] He got a good sleep, though. That’s the good thing: he was well rested. He got so much rest that night that he hasn’t had to sleep ever since.”

Beyond almost leaving a band mate behind, Andrew also remembers being interviewed by Naked News before a show, as well as once having dated a Montreal woman. Even before going out with her for several years, Andrew had already spent quite a bit of time in La belle province.

“That was always good; very very cool stuff just to have an insider’s point of view,” he said. “I learned a lot just from her good guidance and touring around and all that, seeing the city for what it is, an international city. With all due respect to the other cities in Canada, there’s really nothing like Montreal, and it’s a city of the world.”

Other than getting ready for a five-date Canadian tour that also sees him rolling through Halifax and St. John’s, Andrew W.K’s had an eventful past year or so. He’s been running an advice column for the Village Voice called “Ask Andrew W.K.,” photos of him as a male model in the ’90s have been all over the Internet recently, and he was named the spokesperson of Playtex Fresh + Sexy Intimate Wipes in March of last year.

He also broke a world record last June for the longest drumming session inside a retail store, when he played for 24 hours straight in the Oakley store on Times Square in Manhattan—a test of stamina that Andrew welcomed.

“Towards the end, my body sort of shifted over into some kind of stamina or endurance physicality, and I didn’t have to do anything,” he said. “I didn’t have to go to the bathroom, I didn’t have to drink water anymore. I was in the homestretch and I just wanted to keep playing drums. It was the easiest yet hardest thing I ever did.”

“There’s so many people—me included, all my friends—that I spent time with that would give anything to be able to just see a Black Sabbath show, let alone go on tour with them and see it night after night like that,” said Andrew. “And then the Ramones, to be able to sing those songs with Marky playing drums, it’s a sign that there may be a God. And he [or] she is a very friendly creature.”

As far as what projects AWK fans can expect in the near future, Andrew’s currently in the process of writing his first book through Simon & Schuster, appropriately called The Party Bible. He describes it as something of a “new age, self-help philosophy book” as opposed to a biography or autobiography.

In terms of a new studio album, Andrew said he’s been stockpiling songs and ideas for years, but is “waiting for that right moment” to release them.

“I’m not blaming circumstance, because if I really wanted to make the album, I could be recording it right now,” he said.

“But there’s other things that my life has brought me and I try to give my time and energy to those, with the idea that these songs will still be there and I can record them when the time is right. So hopefully this year, and if not this year, then hopefully next year.”

(This story was originally published in The Link.)

Claiming a genre called “pow wow-step” is enough for even those not from the Aboriginal community to be intrigued by A Tribe Called Red. Not to be confused with a certain influential ‘90s rap group, the Ottawa-area trio’s newest release, Nation II Nation, is an example of how such a certain sound can appeal to anyone on a musical level.

A group of producers who, in their words, “remix traditional pow wow music with contemporary club sounds,” Nation II Nation picks up where their Polaris long-listed, self-titled debut left off. The sophomore offering blurs the lines between Native culture and EDM by taking genres, such as moombahton (album opener “Bread & Cheese”) and dubstep (“NDN Stakes”), and combining them with tribal drum rhythms and exuberant, high-pitched chanting.

Perhaps the biggest element of their sound is that they know their way around a catchy tune, too – the house-influenced “Sisters” features looped Native chants over a repetitive four-on-the-floor beat. In short, Nation II Nation is a sign of A Tribe Called Red taking the sound that got them attention in the first place and expanding on it rather than radically changing up their game plan.

MAKING THE SUN RISE IN THE EAST

Despite their band name, the Bombadils aren’t as big Lord of the Rings fans as you’d think. Having the name in common with one of J.R.R. Tolkien’s least loved characters actually stems from a song, called “House of Tom Bombadil,” by Chris Thile, one of their major influences.

Sarah Frank is a fiddler and vocalist for the band and she explains how that song “mimics the speech pattern of the character in Lord of the Rings. Supposedly, he spoke in 7/4 time and, so, that tune was written in 7/4 time.” Also comprised of Evan Stewart (bass), Anh Phung (flute) and Luke Fraser (guitar/mandolin/vocals), the members met in Montreal, via Edmonton, Chilliwack and Halifax, before joining forces in 2009 at McGill’s Schulich School of Music. An even more local connection can be traced from when Phung played in the Calgary Philharmonic Orchestra while studying for two years at the University of Calgary. “While I was there, I made some connections and I did this protégé program,” she says. “It was kind of like training for an orchestra, but I guess they liked me. So, they actually hired me to come and sub, and I played a solo with them once, as well.”

Although the Bombadils all come from Anglophone parts of the country, one track off their latest album, Fill Your Boots!, “Le soleil se lève à l’Ouest,” is sung partially in French, made especially relevant given that language is a particularly hot topic in Quebec right now. But, it comes from their desire to be able to make art in French and from having embraced Montreal’s culture. “I really want to start learning Quebec fiddle tunes as well,” Phung adds. “There’s a living tradition of music here that we can’t ignore, even though we’re not from here.”

Their sound tends to be described as Celtic and bluegrass, but they’re not limited. “That was really a jumping off point for the group,” says Fraser. “We like country, bluegrass, jazz, classical… Wherever good music or art is happening, we’re taking stuff from that,” while Frank mentions that “the idea of how bluegrass came to be was mixing genres,” and credits the Punch Brothers as another inspiration. “They’re always talking about how you can learn a genre, but you don’t need to be limited to that, and you can hear it in our music too.”