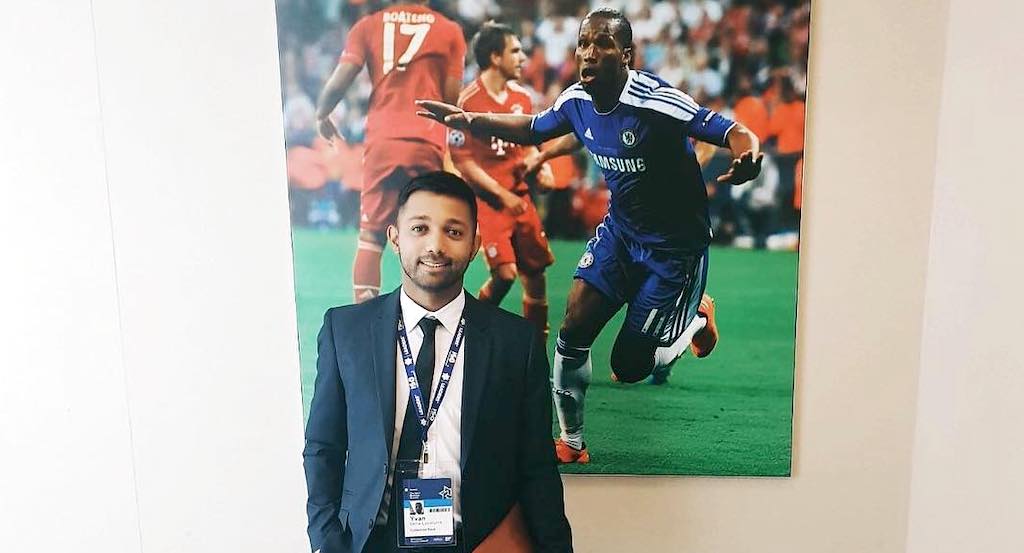 “There’s a growing interest for not only the game, but running a business, idea or service in the space of soccer. I thought it would be great to put everyone together in a meaningful way.”

An online community for soccer fans to carve their path in the industry used to be an unthinkable concept — but that’s exactly what Yvan Delia-Lavictoire has built.

The Montreal entrepreneur is the founder of Lavictoire, a platform allowing content creators with a passion for the beautiful game to grow their personal brand and their projects, as well as network with fellow creators and “solopreneurs” and find job opportunities. Through Lavictoire, users can find new sources of income and find inspiration from their peers’ endeavours.

Creators on Lavictoire are encouraged to interact, exchange ideas, flex their creative muscles, attend workshops and use tools such as worksheets to build their content strategies with. Users can also curate their feeds to get updates about soccer-related topics that interest them, as well as use the site without ads.

For Yvan, creating this kind of community has been many years in the making. Thanks to his father, Yvan developed a passion for soccer at a young age (he supports Arsenal), and played for many years before ultimately deciding not to turn pro. Instead, he found a new outlet for his love of the game around 2010.

“At that time, blogging was big,” he says. “Sharing content online was just starting to become a thing, so I jumped on the ‘blogging bandwagon’ and I built my first platform there. That led me to discovering the digital world in many, many aspects — ranging from social media, to building your own website, to understanding what marketing was, or what it could become, on digital platforms.”

From there, Yvan would score gigs working for the Montreal Impact (now CF Montreal), Major League Soccer, Bell Media and RDS. The marriage of both his footballing passion and his digital marketing prowess led to him starting his own agency, which has been in business for five years.

He nonetheless wanted to start a more sustainable, community-focused business venture — and one that could, as its website says, help users “reach our professional, lifestyle and financial goals with the game we love.” Thus, Lavictoire was born.

“From a North American perspective, there’s a growing interest for not only the game, but running a business, idea or service in the space of soccer,” Yvan adds. “I thought it would be great to put everyone together in a meaningful way, but also where everyone can learn from each other, and learn what I’ve learned, in one space.”

Yvan launched the Lavictoire platform in the fall of 2020 — right in the thick of the pandemic’s pre-vaccine phase. The goal was to build a community of football fans during a difficult time, to help them find new ways to enjoy the game off the pitch. For those who have strategies and/or ideas for their football content, but don’t know how to put them into action, Lavictoire might just be what the doctor ordered.

Instead of simply relaying news about the game, recycling old content or sharing memes, Yvan wanted to help creators build their “own meaningful story” with football.

“It’s helped people build up their own confidence and say, ‘Hey, if there’s one guy in Ukraine doing this, how can I apply it and build it in my own country or region?’” he adds. “There are about 5 billion football supporters around the world, so there are 5 billion ways to explain a story with football.”

Lavictoire’s membership base already includes creators from Australia, Poland and the western United States, in addition to Montreal, Toronto and Vancouver. Aside from giving football creators the opportunity to share their journey with like-minded people, Lavictoire also helps them connect and build relationships. Not only can they make new friends and draw mutual inspiration, they can also hold each other accountable for their progress.

“There’s a sense of encouragement and optimism, rather than just comparing each other with how well this person’s doing [versus] how well I should be doing,” he adds. “It’s a great way for people to find inspiration, and find that added motivation to keep doing whatever they’re doing in the football space.”

As of now, two memberships are available to purchase for creators looking to join Lavictoire. The Squad membership, which grants users access to the community, is free. A Pro membership, which costs a one-time fee of $59 CAD, is an all-access pass to the space: paying members can join co-working sessions, attend online workshops, watch replays of interviews and access templates, workbooks and documents, among other perks.

Locally, the project has already drawn attention. Adrian Sousa, a Lachine-based YouTuber known for his soccer channel RabonaTV (which boasts more than 214,000 subscribers), first caught wind of Lavictoire while stumbling upon Yvan through social media and mutual connections. Once Yvan realized Adrian was based in the Montreal area, he reached out and the two began trading messages.

“When I found out he had this Lavictoire football community set up, I absolutely wanted to be part of it,” says Sousa, who helped provide some feedback to Yvan about the project during its infancy. Since content creation can sometimes be a lonely endeavour, he views Lavictoire as a way to interact with like-minded football creators working toward similar goals.

“I recently started a podcast, and there was actually a podcast workshop in the Lavictoire football community that was extremely beneficial,” adds Sousa. “It’s [a tool for] making connections within the industry, whether it’s through job postings, networking or getting to know other people who have found success — taking what you can from their success stories and trying to apply that to your own.”

With the Omicron variant currently wreaking havoc and causing postponements to matches around the world, an online platform like Lavictoire isn’t just a unique one for the football community — it’s also perfect for today’s COVID climate. This allows for greater connectivity between creators, even if done virtually.

“People saw the value [during the pandemic] of being able to work from home, and to take that to the next level and work from home for yourself,” Sousa says. “This is the ultimate tool in being able to find a way to start, narrow down what exactly you want to do, and then have a group of people around you who have experience, and are going to help you nurture your process, as well.”

The Lavictoire project also comes during a truly exciting time for Canadian soccer. Our national team program reached new heights in 2021, with the women’s team taking home gold at the Tokyo Olympics, while the men’s team have risen to 40th in the FIFA Men’s World Rankings. After eight matches, Canada — led by young talent like Alphonso Davies and Jonathan David — sits atop the CONCACAF Hexagon table, putting them in an excellent position to qualify for the 2022 FIFA World Cup in Qatar.

Locally, there’s CF Montreal in MLS, who were in the playoff mix last season before missing out on the final matchday. Regardless, football culture in Montreal is strong and passionate — and “surprising,” as Yvan puts it.

“Whenever I describe the [football] culture to people from outside of Montreal, they don’t believe it, or there’s a bit of skepticism around it,” he adds. “But before these unprecedented times, there were people travelling here [for matches]. Once they discovered the city and what it had to offer for football, they were always very surprised about how rich the city is culturally, and also how educated the people were with their football.”

As far as Sousa’s concerned, Montreal is “the football city in Canada,” with the CF Montreal fanbase’s outrage over the club’s rebrand — and their subsequent banning of the ultras from Stade Saputo — being proof of how deep football runs in the city’s sporting culture.

“Of course, I’m biased, and I’m sure people in Toronto will argue with that, given that they’re also a very multicultural city,” he says. “But I think Montreal just hits a little bit different, with the European flair the city has. And I think it’s only going to grow from here.”

Lavictoire’s focus for 2021 had been on building its membership base, as well as bringing more attention to the project. For 2022, Yvan plans to help “elevate” his users’ stories based on the community’s wants and needs, via tools such as workshops, products, and courses. He’s also looking to host a Lavictoire public event at some point, though it remains to be seen when that can happen under the current circumstances.

For now, his long-term plans are to help the platform’s 1,000+ members develop their football stories, and building an educational space to help them learn and grow.

“A lot of people go the freelance route, or build their own business. But there’s also people building their own career in football — that’s one of the big things I’d like to see in the community,” he adds.

“There are a lot of professional routes being built right now for football… and there are different roles you can occupy in football that can be presented, and that maybe not a lot of people know about. We want to put ourselves in that space.” ■